TURN ON THE PUMPS BILL FAILS IN DEMOCRAT HOUSE 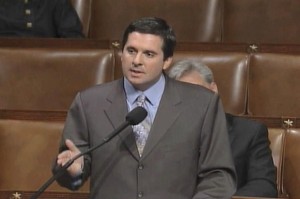 Washington DC – Congressman Devin Nunes commented today on the defeat of his water resolution on the House Floor.

“The failure of Congress to act on California’s water crisis has damaged the institution’s reputation and left the people of California suffering.  My resolution, defeated today by Speaker Nancy Pelosi and her Democratic majority, would have ordered an immediate vote on HR 3105 – a bill that would have returned water supplies to California residents by ending pumping restrictions,” said Rep. Nunes.

Congressman Nunes’ HR 3105, the Turn on the Pumps Act, would have returned Delta pumps to normal operations.  Pumping restrictions currently imposed on California’s state and federal water projects have prevented water transfers from the Delta.  These transfers are essential to farms and small communities in Central California and also provide drinking water for large urban centers in Southern California.

It is noteworthy that, despite the claims of bi-partisan support for returning Delta pumping to normal operations, not a single California Democrat supported the Nunes bill on the House Floor today.