During the Energy and Commerce Committee mark-up of the Democrat healthcare reform proposal, Rep. Deal offered an amendment to ensure that illegal immigrants are not allowed to get US taxpayer-funded Medicaid benefits. The amendment offered by Rep. Deal would maintain the requirement in current law that all State Medicaid programs verify the citizenship status and identity of all applicants for Medicaid coverage. Rep. Deal was the author of this citizenship-verification requirement when it was originally enacted in 2006, and this amendment would have prevented the Democrats’ health reform bill from undermining this requirement. Unfortunately, the amendment was defeated on a largely party-line vote of 28 Yeas and 29 Nays.

Congressman Deal appeared on C-SPAN’s Washington Journal on July 30, 2009, to discuss his concerns with the Democrat’s Healthcare Bill and his views on the issues surrounding healthcare reform. 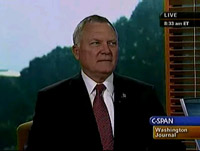 Rep. Deal asks Where are the jobs? on the House Floor 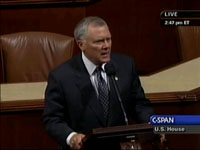 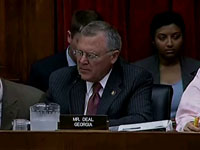 Congressman Deal spoke on the House Floor on July 15, 2009 in support of his amendment which he offered to H.R. 3183 The Energy and Water Development and Related Agencies Appropriations Act. The amendment would have prohibited funds from being used to delay the Corp of Engineers in its continued efforts in updating the water control manuals, which is a key step to addressing Georgia’s water needs. 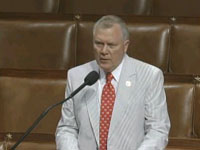 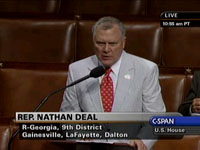 Representative Deal voted against HR 2454, the “American Clean Energy and Security Act of 2009”, also known as the Waxman-Markey Cap-and-Trade bill. It passed by a vote of 219 to 212. 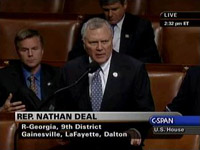 Help for the Recently Unemployed: As you know, our economy is in a precarious state. I know that many of you as well as your families have felt this downturn firsthand. Unfortunately, Georgia’s unemployment recently reached 8.6%. I share your concerns about our nation’s future and I am working hard with other members of Congress to find solutions for our economic decline. To help you find work now, Georgia has a number of resources for job seekers. read more >>

Transparency in Government: Fiscal Year 2010 Appropriations Requests The appropriations process is one of Congress’ most contentious duties each year, allocating taxpayer funding to agencies, departments, and programs of the entire federal government. With limited financial resources for an ever-increasing basis for demand, we must establish our priorities clearly and make every effort to maximize return on dollars spent without raising the tax burden on hardworking American families. read more >>

Visiting the Capitol Recently the new Capitol Visitors Center opened on the grounds of the U.S. Capitol. This new facility is intended to enhance the experience of all visitors to the Capitol by providing a more educational and convenient procedure for visitors. With the new facility in place some of the tour procedures for my office will be changing as well. As before, my office will continue to provide staff-led tours for any constituent who contacts my office for a tour during normal business hours. Additionally, constituents may request a Guide Service’s tour via the internet by going to www.visitthecapitol.com.

Congressman Deal Continues to Fight for Georgia’s Water Rights read more >> Deal Questions Corps Management of Lake Lanier Washington DC: Congressman Nathan Deal (R-GA) called on the U.S. Corps of Engineers to explain their management practices of Lake Lanier during the record drought the residents of the 9th Congressional District currently are facing. I have the utmost respect for the Corps of Engineers, especially the Mobile District but within the current environment we find ourselves facing, I feel prudent oversight is warranted. Deal Stated (Please click here for further information)